Want us to keep you in the loop with news worthy updates? Simply subscribe to the RSS feed below.
http://www.nweei.org/news/press-media/?cid=19&type=rss&format=feed 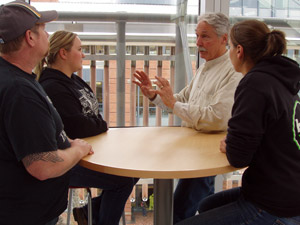 "The first week we were just walking around with our necks craned, looking up," says student Amy Hill, 27. They were looking at the ceiling, where intentional gaps in acoustical tiles expose the building's essential heating, electrical, and water systems.

The building opened to students in January 2013, but the program has been around for more than two decades. It is still one of just a handful of community college energy management programs in the country, thanks in part to generous support from the Eugene Water and Electric Board. Classes used to be scattered around Lane's main campus, Ebbage notes; if instructors wanted students to see a particular heating or water system, "we had to leave our building and go to another building on campus or downtown to see it. Now they're all inside the same building shell."

The building systems include geothermal wells for heating, rainwater cisterns for landscape irrigation and toilet flushing, solar-thermal arrays for water heating, solar electricity, rooftop vegetation for carbon reduction, and passive temperature, ventilation and lighting systems. Plus natural airflow for cooling—something Hill and classmate Lauren Sternfeld tested for themselves the first week of winter term by blowing bubbles on the ground floor and watching them waft up the staircase, just as they were supposed to. All these systems will be on display on Friday, March 15, during the building's public grand opening from 1-3 p.m.

With a thorough understanding of how buildings operate, graduates are prepared to work in a variety of jobs, Ebbage says. Roy Smith, 51, laid off after 17 years in the timber industry, enrolled hoping to prepare for a job he could stay in until retirement—and specifically hoping to do residential energy audits. He recently interned at EWEB doing just that.

"This is the wave of the future, where the jobs are going to be, and we want to be the people to fill those jobs," says Sternfeld, 28, who found that her bachelor's degree in business and recreation management had prepared her for a career she didn't find satisfying. "It feels good to be part of an industry that's making a positive change." She and her fellow second-year students are glad the program's new downtown home was completed before they graduated.

The Downtown Campus is regarded as a landmark project for education, business and the community. It allows Lane to offer training and services at an accessible, convenient location while stimulating downtown revitalization and fulfilling sustainability goals.

"Our instructors are still learning the building," Hill notes. "I think next year's students are going to have it even better."

You have the power to make a difference by directly funding water and energy educational programming through Lane Community College.